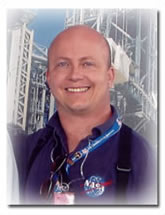 Greetings from the New Mexico Office. I employ ultraviolet, optical and infrared imaging, spectropolarimetry and spectroscopy, as well as radio imaging using the Very Large Array (VLA) in New Mexico to research to investigate active galaxies, quasars, stellar evolution, and extra-solar planetary systems. I am a member of the HST/NICMOS and Spitzer/MIPS instrument and science teams, and a consultant to the Space Telescope Science Institute for infrared polarimetry with HST/NICMOS.

Background: My dad worked on earth resource satellites and systems for the Apollo program. At six months old, my parents propped me in front of the TV to watch the Faith7 Mercury launch and I didn't miss a subsequent televised launch until well into the shuttle program. In fourth grade, "A Wrinkle in Time" inspired me to become an astrophysicist. I received a B.Sc. and M.Sc. in Physics at New Mexico Tech using the VLA. I obtained my Ph.D. in astronomy from the University of Texas at Austin, and then moved on to Post-Doc and research faculty positions at the University of Arizona. I joined SSI in 2002, and live in Corrales, NM (just north of Albuquerque) NM. I have mild Cerebral Palsy (CP), so being an astronaut was not possible. However, working in astronomy and astrophysics has been my ticket to the stars.