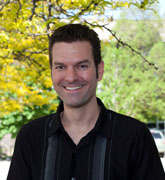 As an undergraduate in astronomy and physics at the University of Arizona, Travis dabbled in research on a wide variety of topics, including: dark matter, brown dwarfs, eclipsing binary stars, pulsar planets, and near-earth asteroids. As a graduate student in astronomy at the University of Texas at Austin he did a PhD thesis on white dwarf asteroseismology, building his own specialized Linux cluster and developing a sophisticated computational method to squeeze precious information out of the data. As a postdoc in Denmark and then at the Harvard-Smithsonian Center for Astrophysics, he built upon these successes by extending the method to Sun-like stars. He came to Boulder in 2004 as an NSF Fellow at the High Altitude Observatory where he was hired as a staff scientist in 2006. His recent work includes asteroseismology of solar-type stars with the Kepler satellite, and a southern ground-based survey of chromospheric activity cycles. At SSI, Travis is leading a project to prepare the Asteroseismic Modeling Portal for future observations of the brightest stars in the sky using the Transiting Exoplanet Survey Satellite (TESS). He recently initiated a ground-based survey of magnetic evolution in sun-like stars using the Las Cumbres Observatory global telescope network.